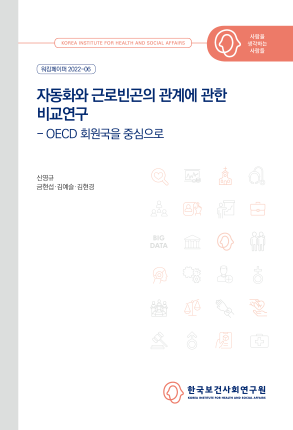 Automation and In-work Poverty: A Comparative Study on OECD countries

This study aims to answer what are the association between automation and in-work poverty and whether factors related to workers’ bargaining power play the role of moderator between those variables in a comparative perspective. To achieve the objectives, this study sets up hypotheses related to the research questions by reviewing the literature of how automation influences employment structures and earnings. The hypotheses are as follows:
- Automation is likely to increase the incidence of in-work poverty by expanding precarious employment.
- Factors related to workers’ bargaining power are unlikely to alleviate the impact of automation on the incidence of in-work poverty because they are mainly concerned with insiders rather than outsiders in the labor market.
To test the hypotheses above, we analyze micro-data sets provided by Luxembourg Income Study and various kinds of macro-data sets including “Installations and Operational Stock for Industrial Robots Data” collected by International Federation of Robotics.
The findings demonstrate that automation and in-work poverty have a significantly positive association. In contrast, it has been found that the interactions between automation and variables to indicate workers’ bargaining power do not have significance or rather amplify the impact of automation on the incidence of in-work poverty. Thus, the results support our hypotheses.
Considering the findings, to prevent automation from raising in-work poverty risk, welfare states are recommended to regard automation as a new external shock to the existing labor market and welfare systems and expand policies and programs to enhance vulnerable workers’ employability and job stability.