Mortality Gaps between Groups of Different Education Levels Have Narrowed

KIHASA has published Health and Welfare Issue & Focus, No. 427, "Trends in and Characteristics of Mortality Inequality by Education Level in Korea."  The lead researchr is Woo Hae-Bong, head of the Center for Population Impact Assessment, KIHASA.

The marked gains that the past century has added to life expectancy represent one of humanity's most significant achievements during that time period, Dr. Woo said. In the 1950s and 1960s, life expectnacy at birth was lower in Korea than in most of the countries that are now members of the OECD, however, there has been a remarkable increase in life expectancy in Korea as a result of an across-the-board improvement in living standards and public health conditions.

He also said that the life expectancy increase that occurred before the 1950s can be attributed mostly to declines in infant mortality, but, from the century's second half on, life expectancy gains have been driven primarily by reductions in old-age mortality. And in the early phase of such epidemiological transition, mortality declines were attributed in large part to declines in death from infectious diseases, but reductions in mortality rate in recent years have been increasingly attributed to declines in death from cardiovascular disease, a key cause of death for older adults.

Woo said, "With Korean society entering super-aged society, "length-of-life" is a source of information essential to making optimal life decisions. The fact that the lengh-of-life variance as measured by C50 is higher for the low-education group suggests that uncertainty about length of life is greater for individuals in this group. The greater uncertainty about length of life in people of low socioeconomic status indicates that these individuals are more likely to face difficulties in making decisions concerning life events such as retirement. Moreover, decisions so made can affect their and their family's lives all the more." He added, "Health and death in old age are in a sense a result of the opportunity structure that spans the life course and of life experiences as accumulated within it. In that respect, given the growing socieconomic inequality in Korea, mortality inequality comes as a cause for no small concern."

Click Research in Brief 2022-13, "Trends in and Characteristics of Mortality Inequality by Education Level in Korea," a full translation of this issue of Health and Welfare Issue & Focus. 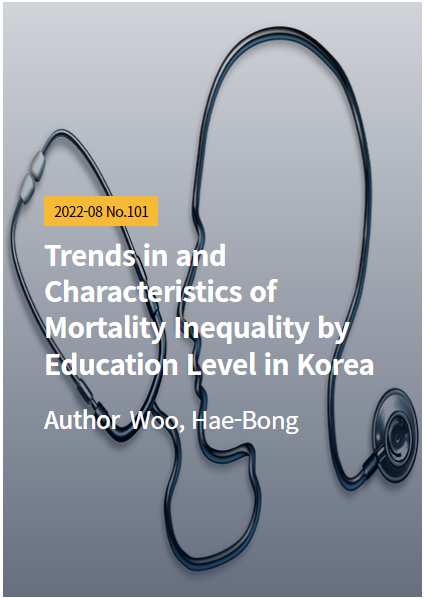